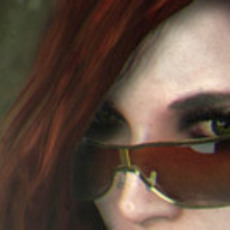 Hello there, my name is Raouf, I am a Technical Artist currently living in Clermont-Ferrand, France.

In this "quick tutorial", I will try to explain how I created "Natascha" and break it down into multiple creation steps. I will be focusing mainly on the shading and texturing part in which I used a hybrid approach by mixing painted bitmaps, vector graphics, procedural patterns and noises.

I will briefly show how I used Autodesk Maya for the base mesh and rendering process, Mudbox for sculpting and detailing the face and torso and then finally using Allegorithmic's Substance Designer as the texturing hub to create a complete material containing nine texture maps.

I started the head modeling from scratch in Maya, where I created some quads around the eyelid area. I expanded the modeling to different parts of the head, such as the mouth and the chin. Then I created three materials: Red, Green and Blue that I applied to each one of my polygon islands.

I continued this process for the rest of the face and torso. At this point I usually use the "Bridge" tool with an adapted subdivision level, then I use the "Sculpt Geometry Tool" to shape the model and smooth the edge loops.

This is the final result with symmetry applied and two spheres used as a place-holder for the eyes.

At this point, I like to work on different pieces in parallel. Most of the time, I create some very simple geometry that I use as place-holders to start establishing the look of the character. This will help me drive the kind of details that I will add later on.

In this example, I have simply created some NURB Curves and used the "Loft" tool to create a very simple hair shape. I also created a highly subdivided polyPlane, deleted some faces and created an nCloth that I dropped on the character's torso.