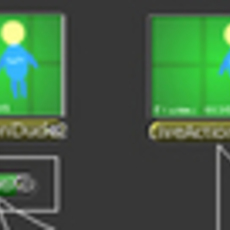 
This tutorial covers the process of generating a cleanplate for a green/bluescreen-shot in the
compositing software Shake. A cleanplate (only the stage, without any actor in front) helps you
to get rid of bumps and uneven lighting in green/bluescreens and therefor to make a better key.
Normally you won�t get your hands on a cleanplate shot on set. So you will have to make your
own. Hey ho, let�s go.

Open the script in the zip-file CleanplateShakeFile.zip .
Your first step will be to create some source-footage we can work on. The script contains a Live-Action-Dude over a badly lit greenscreen. Render out 100 frames of this photoreal footage to a place of your choice.

Import your rendered footage. Normally now you would try to find frames which reveal as
much of the greenscreen as possible and paint your cleanplate out of several frames. But we are
lazy so we want to do this process automaticly.
Like in the painting-method we also need two frames to compare and see which one uncovers
most of the greenscreen.