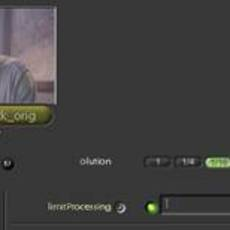 After quite a few requests for tutorials on this subject, I have dug up an old shot for a short film I worked on a few years back. The film was shot on a variety of formats and mastered at 1k for a 35mm finish. I admit this is not the most amazingly successful shot, but it does cover a lot of useful basics. In a two part tutorial I will discuss how to do a rig removal on a live action plate and then look at adding some 3d and 2d vfx elements to complete the effect of a face cracking to reveal �something underneath�.

You will also that I am using Shake 2.51 for these tutes. I had a bunch of folks complain to me that they couldn�t open some of the other scripts on their 3yr old PC �version� of shake �.so here you go! Notice the old school curve editor�. Ahhh memories!

Tracking in Shake: Not the definitive guide as to how to track but some general tips.

Rig removal in shake: There are a lot of different ways to do rig removals some more complex than others. I will show you a simple way that I picked up that should be applicable in any compositing package.

Here is our �talent� with some tracking markers on the side of his cheek. These dots were placed there on set and were used to help with object tracking in 3d for the effect to be added in part2 of the tutorial.

When I learnt this technique in a layer based compositing package, I used to work with multiple versions of the plate layered on top of each other. Then I would slip the underlying version of the plate and cut a hole in the �foreground� version revealing the �background� slipped in such a way so that the marker was not under the hole.

As in this diagram :

The advantage of this technique is that the textural quality of subject ( in this case the �talents� skin and the picture grain ) are identical and do not need much work to be matched. Also, as you will see it is very quick and simple.

We could employ the same multi-layered technique in shake. But if we were working with 2k or even 4k plates there would be a massive overhead because of the multiple version of the footage which needs to be read in and out from the hard drive. Instead I will show you how to create the same result with 1 file-in node and some basic branching.

I have used a compressed version of the plate to ease my server load. I will not be distributing full res versions of files from now on. A few folks have asked me to, but unless I put together a DVD and charge people for it I will be unable to �.. and I don�t want to do that !